After a ten-year lead-in, Monday, March 22, saw the start of construction of a new high quality artificial grass football pitch at SWCHS. Contractors McArdle Sport Tec and Tiger Turf have spent this week setting up the site and bringing in the heavy equipment needed, and the work itself will start in the Easter holidays.

The £1.1m project is primarily funded by a £817k Grant from the Football Foundation, which is the United Kingdom’s largest sports charity, channelling funding from the Premier League, The FA and the Government into transforming the landscape of grassroots sport in England.

Completion is expected in August 2021, ready for the new football season starting in September.

“To cut the turf on this exciting project was terrific.  It means that we have a wonderful facility to look forward to once the new football season begins in the autumn.  The brand new facility could not come at a better time.  Following the restrictive rules of the past year, we need to invest in all of the activities that our young people have missed out on and make sure that their experience of sport is the best we can give them in the future.  The new artificial pitch is a high quality gift to the school and local community.” 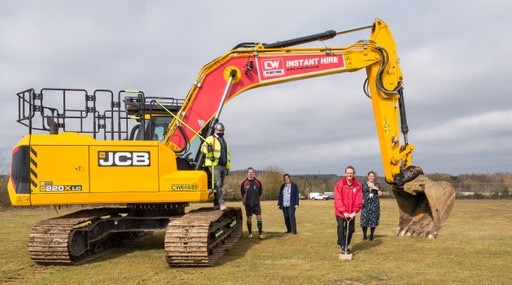